Perhaps the preeminent specimen of modernist literature, James Joyce’s Ulysses is also one of the most iconic and well-known literary works of the twentieth century. Using the structure of Homer’s Odyssey (Ulysses is the Latin form of Odysseus), as well as its character archetypes, Joyce chronicles a day in the life of Leopold Bloom in early twentieth-century Dublin (on June 16, 1904, to be exact). The realistic portrayal of the minutiae of everyday life and the mix-and-match of various genres of writing to portray various episodes have the effect of drawing the reader into the Dublin of the 1900s in a compelling way, making the book a classic example of literature as time travel. Everyday details of the lives of average Dubliners are so intimately and realistically portrayed in Ulysses, that it was frequently the target of censors in both Britain and the United States, making it one of the most well-known of the “banned books.”

In 1904, the same year in which Ulysses is set, James Joyce left his beloved Dublin and lived in self-imposed exile in Europe, primarily in Trieste, Paris, and then Zurich, where he died in 1941. It was in Paris that his monumental work, Ulysses, was published, under the auspices of Sylvia Beach and her bookstore-cum-publishing house Shakespeare and Company. This English-language bookstore in the heart of Paris attracted many expatriate geniuses from the English-speaking literary world besides James Joyce, such as Ezra Pound and Ernest Hemingway.

The first printing of the first edition of Ulysses was published by Shakespeare and Company in 1922, but there were numerous errors, errata which were catalogued at the back of subsequent printings, in addition to other “corrections” and modifications that Joyce continued to make as he revisited his work. The subsequent early printings also list the printing history, including a catalog of seizures and destructions by censorship authorities.

The copy of Ulysses on display at Copperfield’s is the first edition in its seventh printing, which also happens to be the last printing from the original typeset manuscript, with all corrections and modifications listed at the back. Ulysses was originally published in paper wraps, but our copy has been re-bound in a hardcover format.

The book came to us with its text block in poor condition—it had detached from the cover, and there was a major split in the binding right about the middle of the book so that it was in two halves, but for a single thread connecting them. We have glued the book back together, so that it is perfectly readable, but a serious collector will likely want to consider having the book re-bound. As far as we can ascertain, all pages are present, except for the flyleaf, which appears to have been torn out. There is minor light pencil sporadically throughout the text, and the pages exhibit typical toning and some foxing. Pages toward the front and back also have some chipping, creases, and open tears. The first edition of this book in any of its printings is relatively scarce, so in spite of condition issues, this book is a real treasure.

Any fan of Joyce or modernist literature in general will thrill at the chance to examine this copy of Ulysses, published by Shakespeare & Co. in 1925.

NOTE: This item has sold. 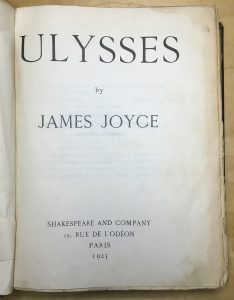 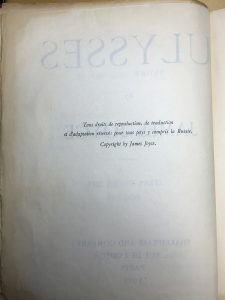 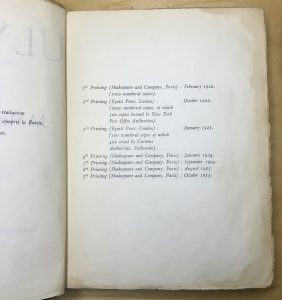 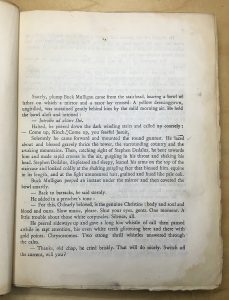 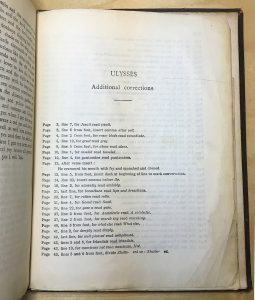 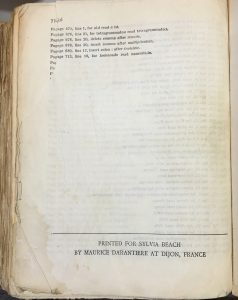 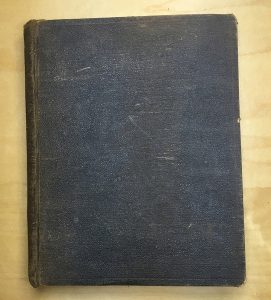 © 2022 Copperfield’s. All rights reserved. Items featured on this site are subject to prior sale.